Reviews of Angrynomics
by Eric Lonergan and Mark Blyth 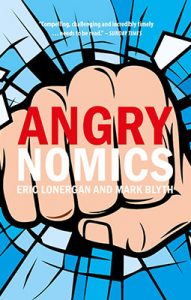 “Framed as a dialogue between a hedge fund manager (Lonergan) and a political scientist (Blyth), this equally entertaining and rigorous book locates the roots of today’s angry, anti-establishment politics in macroeconomic and financial instability, technological change, and rising inequality, which together have created a sense of economic exclusion and insecurity. But despite emphasizing the economic origins of political movements, the authors build less than one might expect on the extensive scholarly literature on economic populism and give short shrift to explanations that focus on culture and identity politics. The book is strongest when it offers novel policies for stabilizing the economy and for addressing stagnation and insecurity, including two-tier interest rates (one at which the central bank lends, and another that it pays on deposits or reserves), cash transfers to households (“helicopter money”), and a national wealth fund to tackle inequality.

We live in the Age of Anger, a time of revolt that Covid-19 looks set to intensify. Before the crisis we had grown used to talking about angry voters lashing out at liberal elites. During lockdown this anger has been redirected at the experts who got it wrong, the politicians who failed to act, the public figures who broke the rules and the populists who exploit it all for political ends.

“What’s interesting about Angrynomics is that it comes up with some solutions to the problem it identifies.”

One is that it makes perfect sense for governments to invest in greening the economy if, as is now the case, the cost of capital is lower than the return on investment.